Well since the Super Loop is just a dream we have to move on to something else. Our land yacht.  RV'ing is MaryJo's thing and we have been doing it now for 17 years.  We started with renting a 21ft class C in New Zealand. That's all it took to convince me that was a good life style.

We bought an old 1978 33 ft Travco.  In its day it was the top of the line.  You still cant find features  that that RV had.  We have now been through about 5.  All of which we vowed would be our last.  Does not this sound like a boaters experience?  Our friends Jim and Gayle Cummings have a 30' Lazy Daze and we liked that. We keep down sizing and are now in 24.1 Thor AXIS.  It has a perfect layout for us.  Going from even a 30ft to the 24 made handling much easier for MaryJo.

Other than the SuperLoop, about the last thing on my bucket list was to catch a sailfish.  So we went to Costa Rica in January and I got my fish. 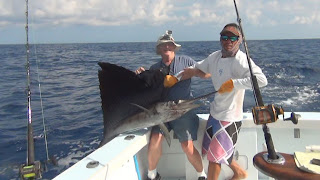 Now MaryJo's bucket trip has been to rv the Lewis & Clark trail.  We keep putting it off and decided enough is enough and come hell or high water we are hitting the road on March 1.
Well MaryJo and I graduated from Catholic High in 1966(High school sweet hearts) As such we have always been the one to get the ball rolling on the class reunions.  We got a committee going, had a couple of meetings and set a date of May 7 for the big 50 year event.  I figured we could travel some and fly or drive back for the reunion.  We have great classmates that are doing 99% of the work but I just couldn't hit the road with that on my mind so will leave the day after the event.
Actually, I also needed the time to get the new rv set up with my amateur radio equipment.   This happens to be the 100th Anniversary of the National Park Service.  Ham radio operators are always looking for an excuse to get on the air so to celebrate amateurs are encouraged to setup portable and operate from the various parks.  Each park has a federal designator.  The idea is to activate as many parks as possible with as many contacts as possible.  A contact consist of operating form the park and passing on a signal report to as many other amateurs as possible.  So there are two categories activators and chasers (those that try and talk to as many parks as possible.)   You can do both but since we are going to be traveling, I figured that it would be fun hit some of the parks and operate my station form them.  It is fun to be the station everyone is trying to call.  We just made a short shake down trip down to the Everglades(NP18).  I put out the call that I was on the air and operating.  With in minutes I had a hundred or so people all calling me at the same time.  That's what you call a pile-up.  Its quit a challenge to pick out the other persons call sign, and get it logged correctly so they get credit for talking to you.
We have found a couple of things that the rv dealer needs to fix but I think we will be ready to hit the road May 9.
﻿
﻿
Posted by Roger at 5:32 PM No comments: