Yesterday was a very easy going pleasant day.  The weather was picture perfect.  I just tooled around day at 5 mph.  That was great for gas mileage.  I got 7.5 mpg.  The week-end boaters all out.  They were going every which way.  All creating 3 foot wakes.  I did a little fishing along the way but the fish were the lucky ones.  I ended the day a Welch Bridge that goes to Madeira.  27  48.542n  82 47.630w.  It is an ideal spot very well protected.  There is a McDonalds and a Publix there.  McDonalds has a very nice floating dock. 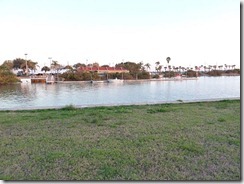 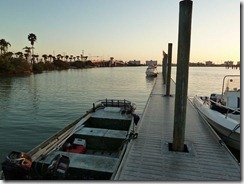 See the little John boat in the one picture?  There were four or five of these rag tag type boats at the dock.  I couldn’t figure them out.  They were all beat up, obviously being used but not for fishing.  I saw no fishing gear.  Anyway I went in MacD’s and got an order of fries.  I ask the manager about buying a bucket of ice.  The one in Pensacola will.  The lady manager said “no, I always give you guys some.  Bring in your bucket.”  It wasn’t until about 8pm that I figured it out.  The boat’s belong to a flotilla of local homeless.  There are all kinds of little islands around.  These guy’s just pick one out and call in home.  They come into the dock and go to the store for supplies.  They all started coming back to the boat about dark and were all gone by 7:30.

For my dinner I fired up the grill and had one of the two rib eyes that I brought.  I been putting a little “Slap Ya Mama”  cajun seasoning on mine before cooking.  My o my is that ever good.

Got up around 6 am took a little walk before casting off for the day.  It started out another nice day with zero wind.  That didn’t last too long.  Sunny but the wind just keep blowing harder and harder. By the time it came to crossing Tampa Bay it was really blowing.  They are doing some dredging at the Sunshine Skyway Bridge.  I called the tug on the radio and said the his wind gauge was reading 35 mph.  Even though I was getting bounced around I got a neat picture of a ship coming under the bridge.  I couldn’t get across the channel fast enough so I had wait for him to pass. 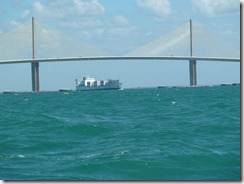 After crossing Tampa Bay I went a few more miles to Longboat Key.  I was given specific instructions by a friend that I must eat at MOORE’S Stone Crab Restaurant.  http://www.mooresstonecrab.com/id1.html 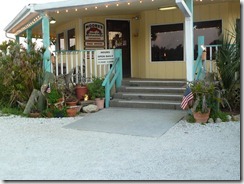 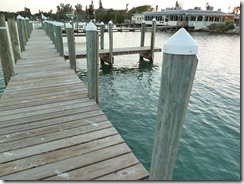 What another outstanding day. Got up around 6am. A little fog but it burned off as soon as the sun came up. The wind was dead still. I piddled around the boat for awhile trying to get things a little organized. Then fixed me some scrambled eggs and then took one last stroll around the neighborhood before starting the engine hitting the water.

I got off the dock at 0840. I have no plans or destination for today. When I leave Hudson and turn on a southerly course it’s about 9 miles before I pick up mile 150 of the intracoastal waterway at the juncture to Tarpon Springs. 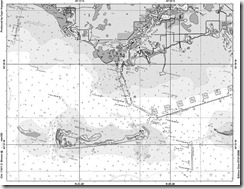 It has been just too long since Leg II but that is just life. Too many things going on. It’s hell being retired. You just don’t have time to do anything. Well last week I saw a post on the c-brat forum from some c-brats that were on the way to the keys. It got me motivated. I did some calculations and decided I had to leave like now if I was going to have any time at all for Leg III.

The boat was pretty much ready. A few months back I had done some re-arranging of some of the electronics and mainly dressing up the inevitable rats nets of wires behind the dash. I did add a fluxgate compass that I had retained from previous boats. I cut about a 5 in by 7in access hole in bunk in the v-berth for a place to install the sensor for the compass.

I also overhauled the breaks on the trailer in Sept. It had 13” tires but my cousin gave me an almost new set of 14” trailer tires and I wanted to swap those out. I thought that would be easy enough, just go get some 14” rims at the junk yard for a couple of bucks. Wrong. I spent two days tracking that down. I could find rims with the correct lug pattern but the center hole on a trailer tire needs to be bigger than the rims that fit a car. The with of the rim may also be different but I didn’t get that far. I just ended up buying new rims with new tires. I would have left the 13’s on but the plan is for Mary Jo to drive the two vehicle and trailer to Jacksonville and I would feel better knowing she had new tires.

The biggest thing I needed before leaving on the trip was a new SPOT tracker. Then came out last year with a Delorme gps/spot combination. That will let you type in short messages to send rather than just the canned OK and or help message. I like the idea of being able to pass on a little detail, especially if I ever had to send a request for HELP. I could tell what the problem is rather than just saying I need some help. I ordered that from AMAZON and it was due to get here on Tuesday. All I would have to do is activate it and I would be ready to leave. Well it got here but it didn’t work so just activated my old unit and sent the new one back. 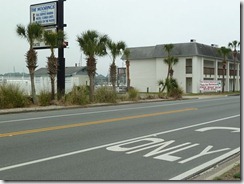 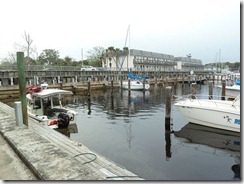 All of this delayed me being able to get to Carrabelle until Thursday. Now weather is an issue. The first of the week the weather was perfect. Now there are two back to back fronts closing in with not much of window until next week. I took the gamble and Mary Jo and I headed to Carrabelle. I figured she could drop me off and I would just wait it out if need be. Winter weather in the panhandle is a coin toss at best. The initial forecast had some promise for Sat. The Moorings at Carrabelle is a combination Marina and Motel. The have a great deal, you get a free boat slip a room rental. The place is really nice. Well Mary Jo stayed Thursday night and left Friday morning. The wind was blowing just like the weatherman said. Every hour I would put up the weather and track the front. At about 2pm the front came through Carrabelle. About a hour later the winds laid down switched to the west. Now they were saying that by Sat the wind would clock around the East and Southeast at 15 and seas 2-3. This is the worst direction for Carrabelle. Anything with East in it is bad and 2 to 3 there is like 5 to 7 and I’d be going straight into it. It didn’t sound fun. Now looked like the best time. I had a plan. Go across the bay, around the East end of Dog Island, stick my nose out and if I didn’t like what I saw there is a good anchorage on the East end of Dog Island.

I started loading the boat at 1600 and was under way at 1615. I turned to a heading of 100 degree after passing green #1 at the entrance to Carrabelle. At 1750 rpm I was making 6.5k. The wind was still about 15 in the bay but it from the SW and I was riding with it. When I cleared the island the wind was coming a bit more from the south but it wasn’t too bad. At 1900 rpm I was making 6mph. The boat was rolling some but not enough to toss everything on the floor. I figured I could ride the backside of this front all the way. I set a course to the marker off Cedar Key and set George, the autopilot. Distance 90 miles.

All went well. Even after it got dark and was it ever dark. No moon. No lights from shore. You know once it gets dark the weather always seems a little worse than it is but not tonight. The winds and seas just kept laying down. By about 2130 the stars were out in their full glory. What a view. I haven’t seen such a sight for many years. But that was short lived by midnight the fog rolled in. I mean from the back of the boat I couldn’t hardly see the front of the boat but the good thing was the Gulf of Mexico became the Lake of Mexico. Things stayed like this all night. By sunrise I was just off of Cedar Key where I had planned to make a landing, rest and fuel the boat. Even though the fog was still there I could now see well enough to see just how calm it was. The fog did thin some to where I could see about ¼ mile at times. I had plenty of fuel I had only used about 20 gal of my 58 that I had. I decided to take advantage of the calm gulf and run at cruise speed to Hudson which is just north of Tarpon Springs. I have always gone in at Tarpon but my canvass guy told me about Hudson. It is a good find. More about Hudson later. I kicked her up to 1900 rpm and made 20 mph for the 70 mile run. By 0830 the fog had burned off. By 1050 I was in Hudson. 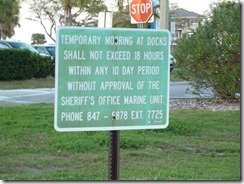 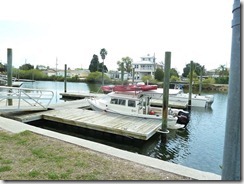 This is a great place. 28 21.704N 82 42.555W. There is a string of canals with houses but at the end of one is a county boat launce. It is very well maintained with clean public rest rooms and a floating dock with enough room for at least 8 boats. There is no electric or water but you can stay here for up to 18 hours. Actually I talked to Marine Patrol officer that told me that in reality unless you were there more than 3 or 4 days they wouldn’t say anything. There are two or three places to eat within a block the best being Ollie’s Oyster Bar. You can also dock your boat at Ollie’s. There is also a couple of marinas with fuel. All in all this is a must stop location. 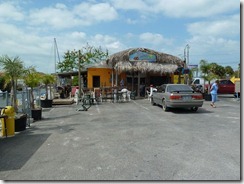