Bill Westmorland called Roger first thing this morning.  But he can’t get away until 2 pm tomorrow. He will call us then to give us directions.  So we spent the day in the parking lot of the Moose Lodge, updating our blog and adding pictures.  Then I balanced our checking account and paid bills.

At 5:30 pm we drove back into Oklahoma City so Roger could transmit from the Memorial again.  He was able to make more contacts because the noise level was much less than before.  Then we returned to Moose Lodge and went inside for a little while, visiting with a couple of people who were friendly and courteous.

We received a text from our classmate, Bill Westmoreland.  He said he could meet us about 3:20 at the Panera’s restaurant, just a few miles from the Moose Lodge.  While we waited, Roger found a local barber shop, where he got a very nice haircut.

Bill was very glad to see us.  We bought sandwiches and visited for a couple of hours,sharing some old and new stories about a few of our life experiences.  He plans on retiring from the FAA in about 3 years.  Then he hopes to convince his wife to tour summers in the states, and return to Hawaii in the winters.

While Bill was reminiscing, he talked about surfing with Mike Engle, Jimmy Morgan, Mike Maney (who was a year behind us) and Matt Bell.  They were such really good memories, full of fun times.  We were all grateful to have had the opportunity to share them.

It was 5:30pm when we left Oklahoma City and headed east again.  The landscape in eastern Oklahoma is so nice. There are lots of green trees and grasses, with tiny yellow and white wild flowers interspersed. After the dry dusty southwest, I’m loving it here. They obviously have more regular rainfall in this part of the state.

There are occasional small herds of cattle grazing in fields and small shallow rivers and creeks, which we pass over on interstate 40.  It seems to be a peaceful and clean state.  There is no litter along the highway, which makes a very pleasurable journey.

We found a Corp. of Engineer campground right on the shore of Lake Eufaula. 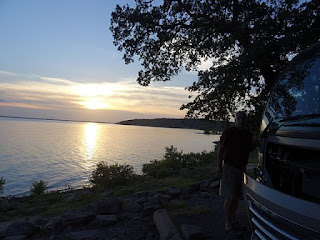 We spent the day bird watching and found a new bird, the Bullocks Oriole.  Roger is the one who figured it out. We had been looking at another bird that was yellow.  He realized after awhile that it was the female Bullock’s oriole.

Later in the day we went swimming in the lake.  But it was a challenge, because the shoreline was covered with large rocks, which we had to negotiate before getting to the water.  Then we found out there were rocks all over the bottom, as well.  It was quite different from our sand covered beaches at home.  But the water felt great once we got deep enough that the rocks were smaller.  Fortunately, we had remembered to bring our swimming booties with rubber soles.  Otherwise, we might have had some cuts and bruises to contend with.

There was a lovely stiff breeze this morning.  I was very excited to notice a scissortail flycatcher before we left the park.  It was so obvious, due to its very long divided tail.  We were enjoying ourselves so much on the lakeview camp site that we didn’t leave until 1:30pm.

We passed a lot of farm land.  Most of the crops are corn, but there are others that we can’t tell what they are.  But it’s great to see so much green.  I sure appreciate it much more after being in the southwest, where trees are almost non-existent.

We arrived in Ft. Smith, Arkansas, our next national park site.  It is located just across the Oklahoma/Arkansas state line, next to the Arkansas River.  Unlike most of the forts built in the early years of our countries history, the first Fort Smith, built in 1817, was established to keep peace between two Indian tribes.  The native Osage Indians were in conflict with the arriving Cherokee Indians, who were forcibly relocated from their homeland. 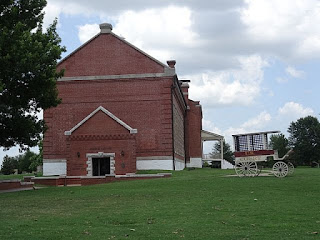 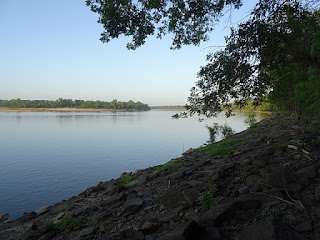 The forts history covers a period of 80 years.  It served as the warehouse for multiple products needed by the Army and the new settlers.  In the later years, Ft. Smith became the location of the Federal Court.  It took over 20 years for U.S. Marshals and Judge Isaac C. Parker to bring law and order to the Western District of Arkansas.

We heard from Tricia. She and our granddaughter, Kaitlynn are part of a mission group who left for Haiti early this morning.  There are 16 people on the team. They are in the Atlanta Airport right now.  Anyone who is reading this, I ask for your prayers that all will go well with their group.  They have worked so hard to earn the money to pay for their expenses.  May our God bless their efforts and give them a rewarding experience of helping those who are so much less fortunate than we are in America.

A large part of Arkansas is rural countryside.  But it is a pretty state, green even in the height of summer.  (By now you know I love green.)  That gives it a mellow atmosphere, pleasant and “easy on the eyes”.  Most of the land we are driving through now, in the western part of the state, is undeveloped but peaceful; some might say, pastoral.

Oh!  We just turned east and there were several blooming mimosa trees with fluffy pink flowers.  I hadn’t seen them in so long.  What a pleasant surprise.  I forgot that they grow wild in some places.

As we pass over small creeks, many with out water, we realize that Arkansas is a very rocky state.  That would explain why we have not seen any farms.  It seems so fertile, but there are apparently many rocks under the pretty green grasses we see on the surface.  We have seen a few cattle, but not nearly enough to support a family.

We found another Corp campground on a lake just west of Hot Springs.  On Lake Ouachita, It is situated on a peninsula, so we got an even better site than yesterday.  We have almost 360 degree view of the lake.  Roger was so happy, he paid for three days. 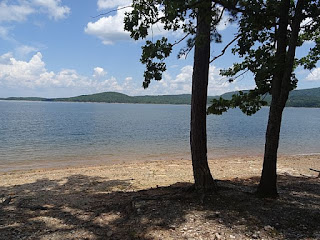 We went swimming again. This lake has clearer water and the rocks on the shore are smaller.  But the rocks are like shale.  They are thin layers of muti-colored rocks.  The colors range from white, brown, red, orange and dark gray.  But they are soft and easily breakable.

We came here a few years ago and rented a houseboat for a week with Roger's brother and had a great time then also.

In the evening, Roger built us a fire, even though it was warm, it was still delightful to watch the flickering colors in the flames.
Posted by Roger at 11:59 AM