We stayed in the campground updating our blog.  Roger fixed a leak we discovered in the water connection on the outside shower compartment.  Then we cleaned up our campsite, as there had been a big storm last Thursday evening and there were small pine cones and sticks everywhere.  There were trees downed all over the park.

We had a lovely morning, as the sky was overcast and there was a pleasant breeze.  That kept the air quite comfortable.  So we sat outside and absorbed the peacefulness of the water flowing in the lake.

Roger really needed this break from driving.  I can’t believe we have covered over 7,000 miles.  The number of places we have seen and the things we have done even amazes me.  But we still have a few sites on our “to do” list before we get home.

We took a long walk around the campground, checking out the other sites and decided
Roger picked the best one.  It gets better breezes, being on the end of the peninsula and at a higher elevation.

We have developed a habit of sleeping late in the morning, so it was 1 pm before we left Lake Ouachita.  (Hope we can break this habit when we get home.)

The 25 mile drive through the Caddo Mountains was very pretty.  When we arrived in Hot Springs, Roger bought a hand mitt from the official National Park Store.  He still remembers how much he enjoyed the one we got several years ago when we were fortunate to have our original visit to Hot Springs.  The National Park tour of the Fordyce Bath House was so very interesting.  What I remember most are the beautiful stain glass windows in several parts of the building.  I still enjoy seeing them rotate on our computer screen at home.

We drove up the mountain road above the city, which we did not do on our previous visit.  It is a one way loop which has such sharp curves that vehicles over 30 feet long are restricted from using it.  We pulled into a parking lot just shy of the top of the mountain, where Roger transmitted.  A substantial portion of the city is National Park property. This area had the highest elevation, hence a better chance for favorable reception by other ham radio operators.

After making 60 contacts fairly rapidly, the band “went dead”, meaning Roger stopped receiving calls.  So we drove back down the mountain and found one of the many “filling stations” where people can fill up containers of fresh spring water.  We filled all of our bottles, then proceeded on our route to the capital of Little Rock, Arkansas.

Arkansas is a really well rounded state.  They have lakes, rivers, mountains, forests and national parks.  There is just about anything you might want.  We have enjoyed our previous trips to the state and are glad to see something new in Little Rock.

We found a city RV park right on the Arkansas River.  It was basically just a parking spot with electricity.  There was very little shade but it was adjacent to the bicycle/pedestrian walking loop that goes along both sides of the river. 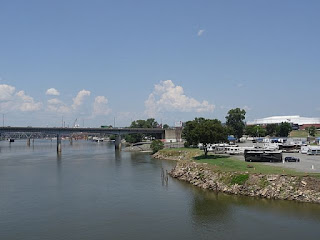 Our first site was only visible after dark.  We sat on a bench right along the river bank and watched as one of the bridges lights came on.  The entire length of the bridge first showed blue, then red, then white.  Next all three colors came on together.  Then the red and white had stripes.  When you looked at the reflection on the water, it looks just like our American Flag.  It was so exciting to see this great symbol of our country.  What a grand display!

We left on our bikes and rode across the pedestrian bridge.  It was so hot that we had to stop occasionally to rest. After searching for the visitor’s center for about a half an hour, we finally found it.  We cooled off in their air conditioning and gratefully accepted a cold bottle of water from their refrigerator.  After getting a map, we rode to the Capitol Building and waited for the tour. 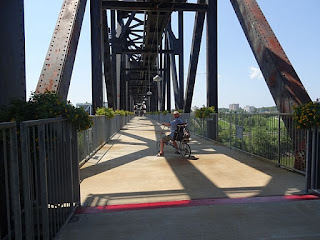 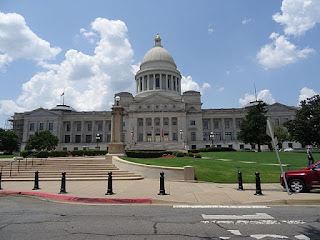 There is a great deal of marble in the central section of the building.  Walls, floors, stairs and columns are various types of white marble.  Some came from Colorado and some from Alabama.  The House and Senate Chambers are relatively simple, except for the ceiling, which is stained glass.  The most impressive parts of the building are the six bronze doors at the front.  They were made by Tiffany Jewelers and cost a total of $10,000. 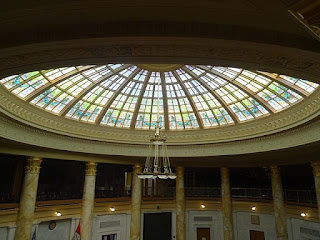 The state seal is on display on the first floor, made in colored glass in a large frame in one corner.   It has “16 elements” (which seemed way too many to me.)  The goddess of Liberty, an angel of mercy, a sword of justice, and an eagle “holding emblems of both peace and war in its talons” are a few.  There is also a shield with “emblems of the state’s 19th century economy such as steamboat transportation, agriculture and industry.”

We drove back along the riverfront on our bike ride back toward the RV.  At the beginning of the route there is a small public water park.  There were several adults and children playing in the fountains of spray shooting up from the circular concrete floor.  Roger and I were so hot, we let some of the water spray on us, as well. It felt great and definitely helped cool us off.   After getting back on our bikes, we drove past several different sculptures spread through out the waterfront park. 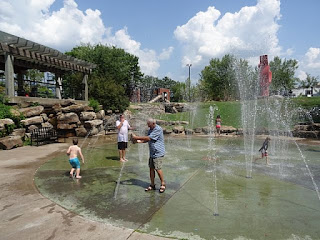 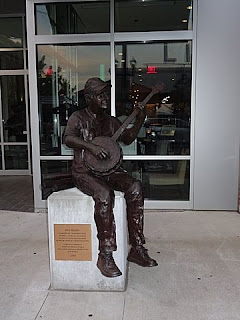 Little Rock is doing such a wonderful job of making their waterfront a place for, not only there citizens to enjoy, but visitors as well.  The pedestrian/bicycle route reminds me of the Louisville waterfront park.  Having it extend to both sides of the river makes it even more enjoyable.  With the sculpture garden, it adds a social beauty to the natural beauty of the living gardens along the river.  People are encouraged to exercise, thus gaining a more healthy body, as they also receive the benefits of a healthier mind and spirit.

When we got back to the RV park, we each took a shower.  Then Roger tried to rest while I did laundry.  After eating dinner, I was shocked when Roger suggested we walk back into town.  Since the sun was down by them, it was not as hot and there was a little breeze.  There really was not that much going on downtown.  But Roger found a fried chicken restaurant and ordered one piece of chicken.  Then on the way back, we went in an ice cream shop that also had baked sweets.  Boy, did we ever mess up our calorie count tonight.

This morning we returned to the Central High National Historic Site and followed the self guided tour.  It was painful to see this frightening part of our country’s history.  Integration began when Roger and I we 10 and 9 years old, with the worse part passing us with little understanding, due to our youth.  Change has been very long in coming and still has so far to go.  So many died and so much sorrow accompanied those losses of life.  We must continue to pray for love to prevail over all our prejudices. 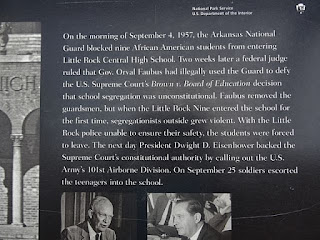 One totally unexpected site was across the street from the visitor’s center.  It was a restored Mobil Oil gas station.  When we asked the Park Ranger about its significance, he said that was where all the radio and TV reporters had to go to send in their stories, as it had the closest phone.  But they could not use it without paying the owner first.  That was a great side story. At least someone in the local community benefited during this historic crisis.

After Roger transmitted for about an hour, we left Little Rock and drove to Pine Bluff, Arkansas. There was a lovely lake there with a big pavilion and picnic table.  We waited there and started our dinner preparation.  Then we went to Mass at 5 pm at St. Joseph’s Catholic Church.  Right as we pulled into the parking lot, there was a big storm and lots of rain.  We were soaked by the time we got inside.

Right before church, Roger had checked the temperature in Pine Bluff.  It was 95 with a heat index of 109 degrees.  So we have definitely reached the southern humidity we know and hate, but can’t do anything about it.  The rain did help cool it off a lot.  We continued south east to a corp of engineer campground right on the Arkansas River.  We could not believe there was one site left.  Roger angled the RV so we had almost 270 degree view of the water.  Before we went to bed, saw two different barges pass right in front of us.
Posted by Roger at 6:06 PM